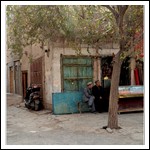 We arrived in Kashgar in the dark after a very long day that started with us trying to find a ride from Kyrgyzstan across the Irkeshtem pass into China. It felt strange to leave Central Asia as we are amazed at how we truly enjoyed this part of the world. Leaving behind Central Asia where we had spent 6.5 special, exciting but also tough weeks we imagined going back into China as a small step up in the modern world and switching into a different world.

However, we needed not to worry, as the moment we stepped out of our hostel and walked down the busy windy streets looking for dinner we felt like we were still in Central Asia. This cannot be China, can it? The streets were lined with kebab and shashlik stands filling the air with smoke. Melons and nuts stands offered dessert to the heavily veiled women and men with their distinctive caps wandering the streets. Huge sheep hung from trees waiting to be sold as mutton for yet another mutton dish. The only difference with Central Asia was the liveliness at this time of the evening. As night falls in Central Asia, the streets empties out, however, here in Kashgar, it was still busy with people wandering around and electric scooters rushing in and out.

We settled for a busy hole in the wall and found out that they were famous for their…laghman, our favorite dish in Central Asia. Only in Kashgar, it is called lamian. Another dinner with laghman it is.

The next few days we spent strolling around the old town which is totally different from the new town of Kashgar. Whilst in the old town, you would still be in Central Asia, the new town represents the standard modern Chinese town with big buildings, broad multiple lane roads and of course a People’s Square complete with a huge Mao statue. The old town however, brings you to streets known per their specialties. One street was filled with families that were wood carvers, whilst another street was famous for cast iron workshops. Small bazaars filled with meters of colorful clothes and scarves mixed with fruit, vegetables and of course lots of sheep were scattered abound. 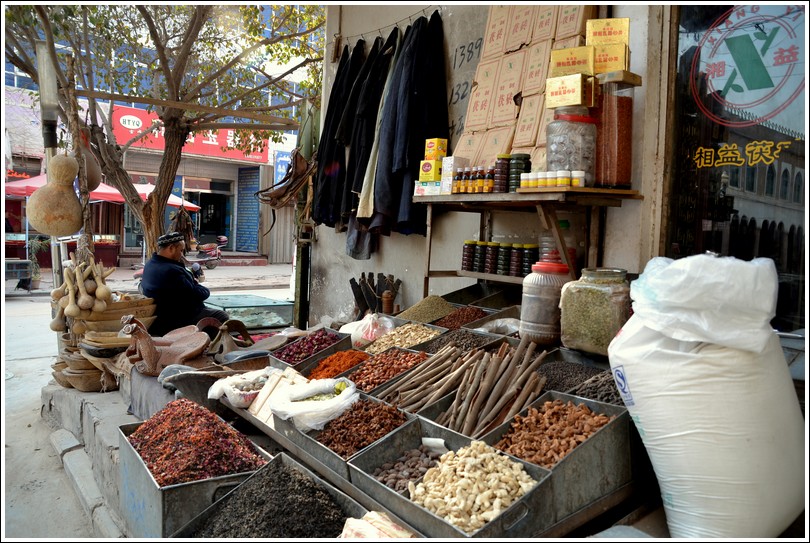 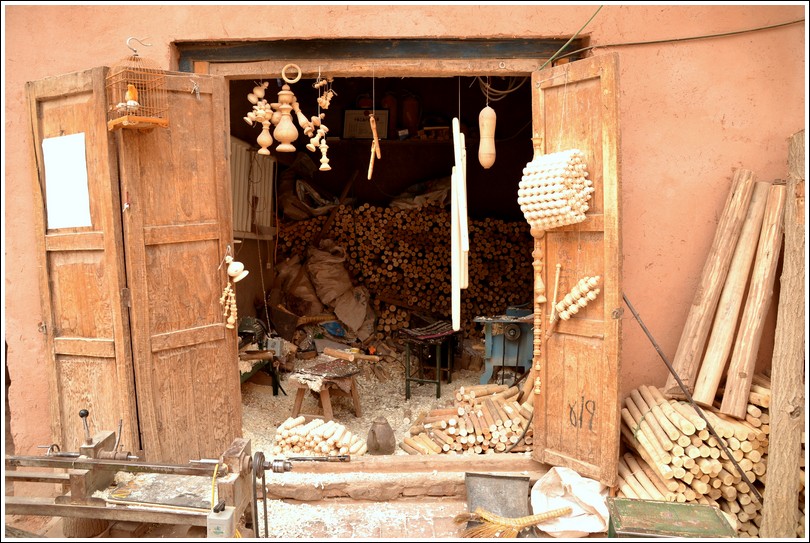 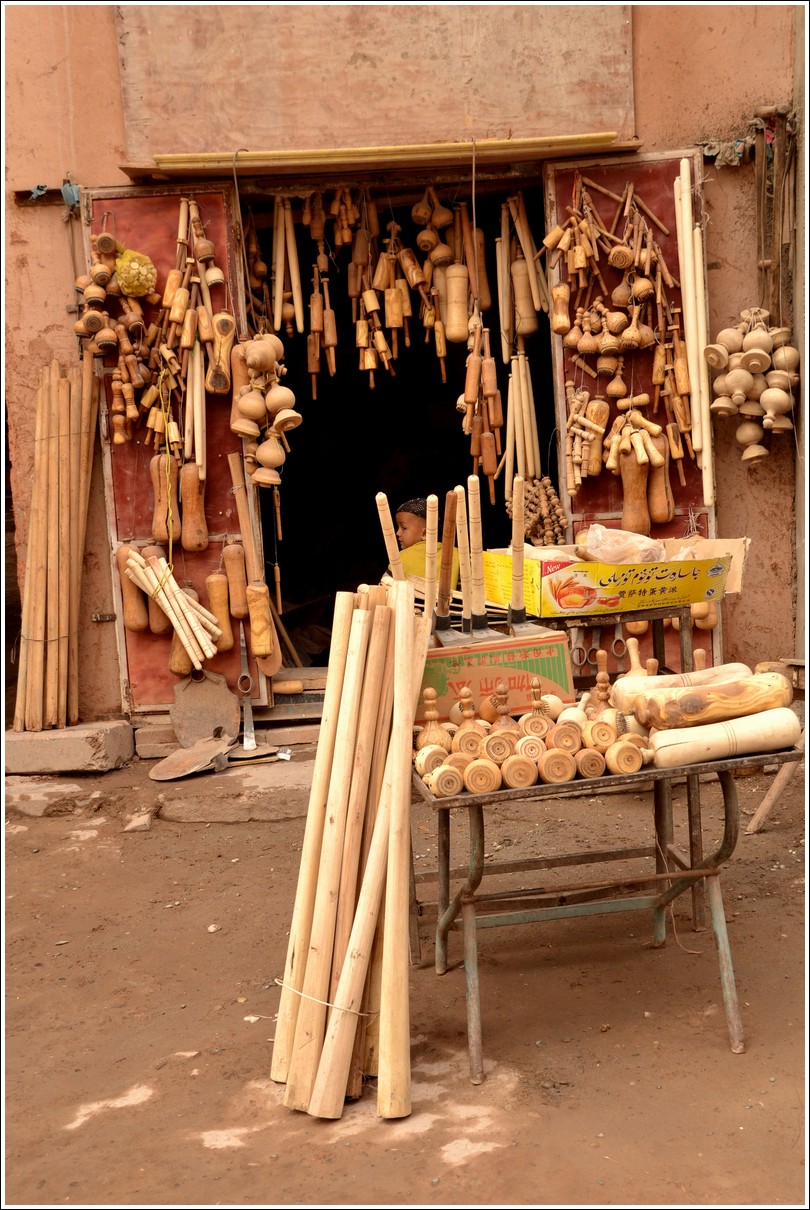 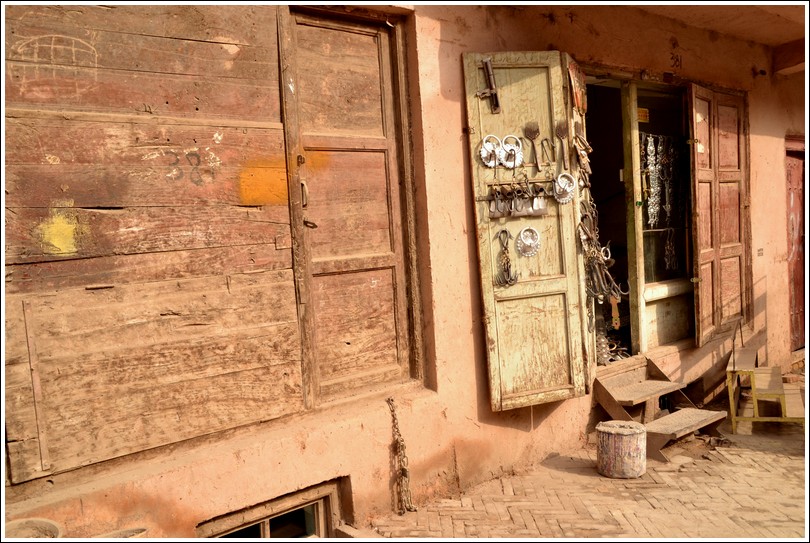 The town has a nice relaxing atmosphere and just wandering around and peaking through the doorways into the Kashgar courtyard homes gives an insight into their lives. A fast diminishing life, as also here, the ‘modern China development’ plan was kicking in and every day, beautiful old homes were being knocked down to make way for new ‘modern’ buildings. We are happy to have seen this Kashgar before it disappears. 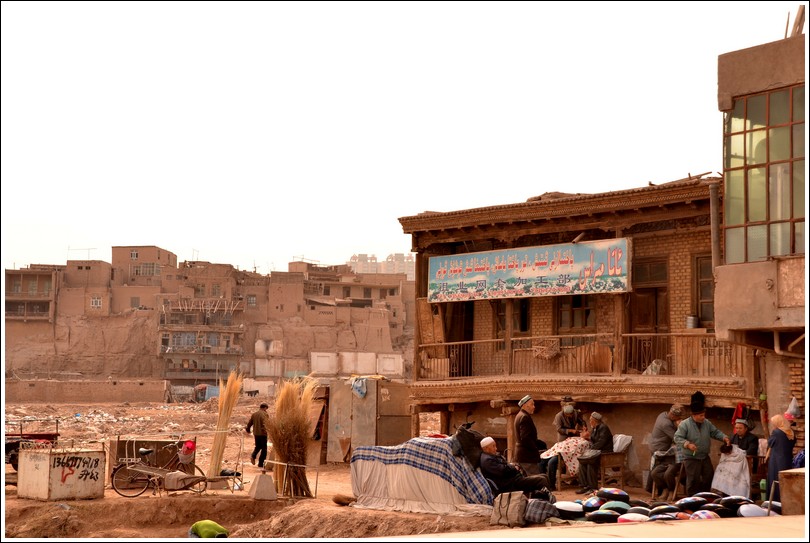 Going for a cut or a shave 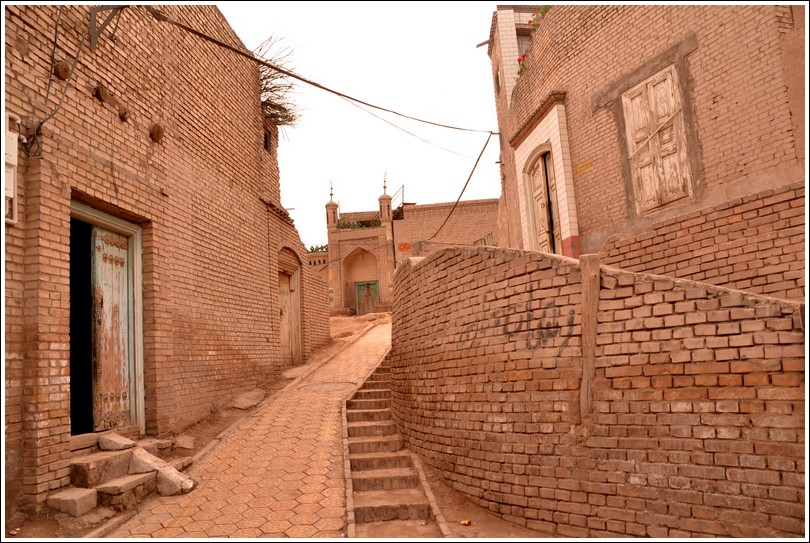 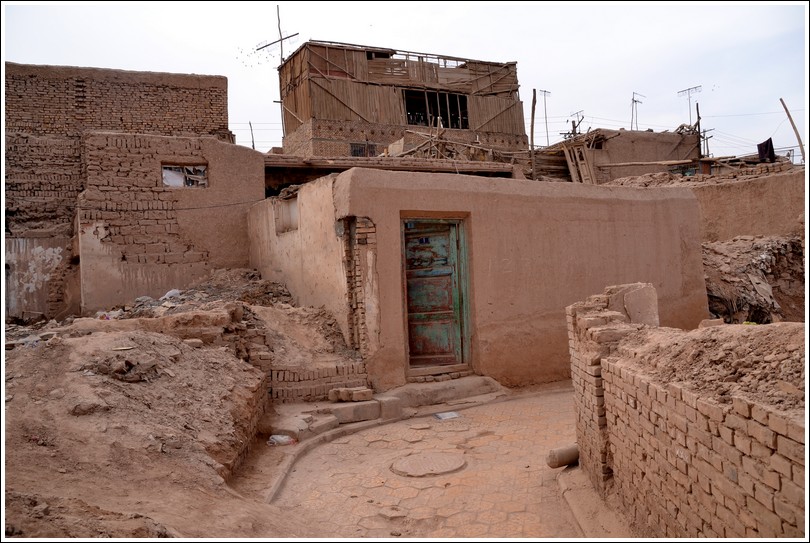 A fast disappearing side of Kashgar

Eating our way around and discovering a town is one of our favorite ways to spend our days. Breakfast is a mixture of meat pies, with boys hanging above round fat earthen ware ovens pulling out these pies that were plastered on the oven’s wall and Chinese mutton dumplings. At a large Turkish supermarket we would try out the various Turkish pastries and cookies. Lunch and dinner is usually laghman or for variety we can also go for plov, in Kashgar called polo (rice with carrot, onions, mutton and fat) lamb head soup or other unidentified dishes which we did not dare try. And not to forget all the kebabs and shashliks. For dessert, in addition to all kinds of melons, pomegranate and kilos of nuts, there are also vendors selling special walnut cakes in syrup and candied apples. 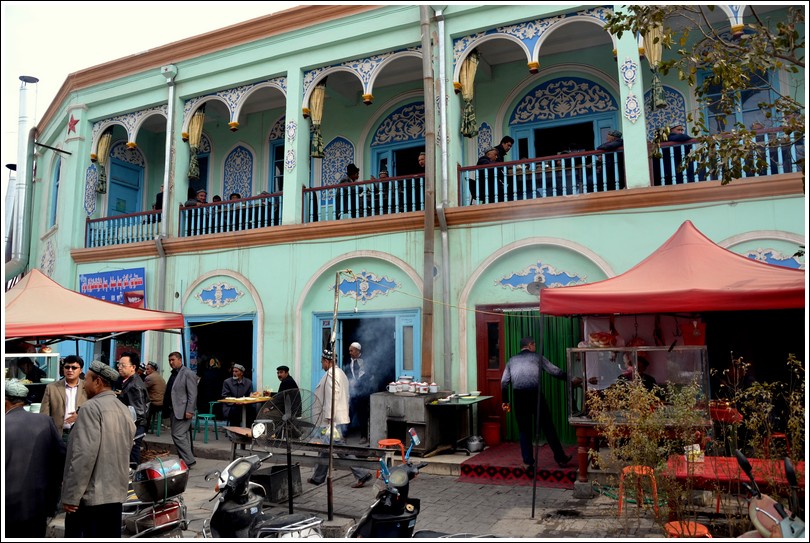 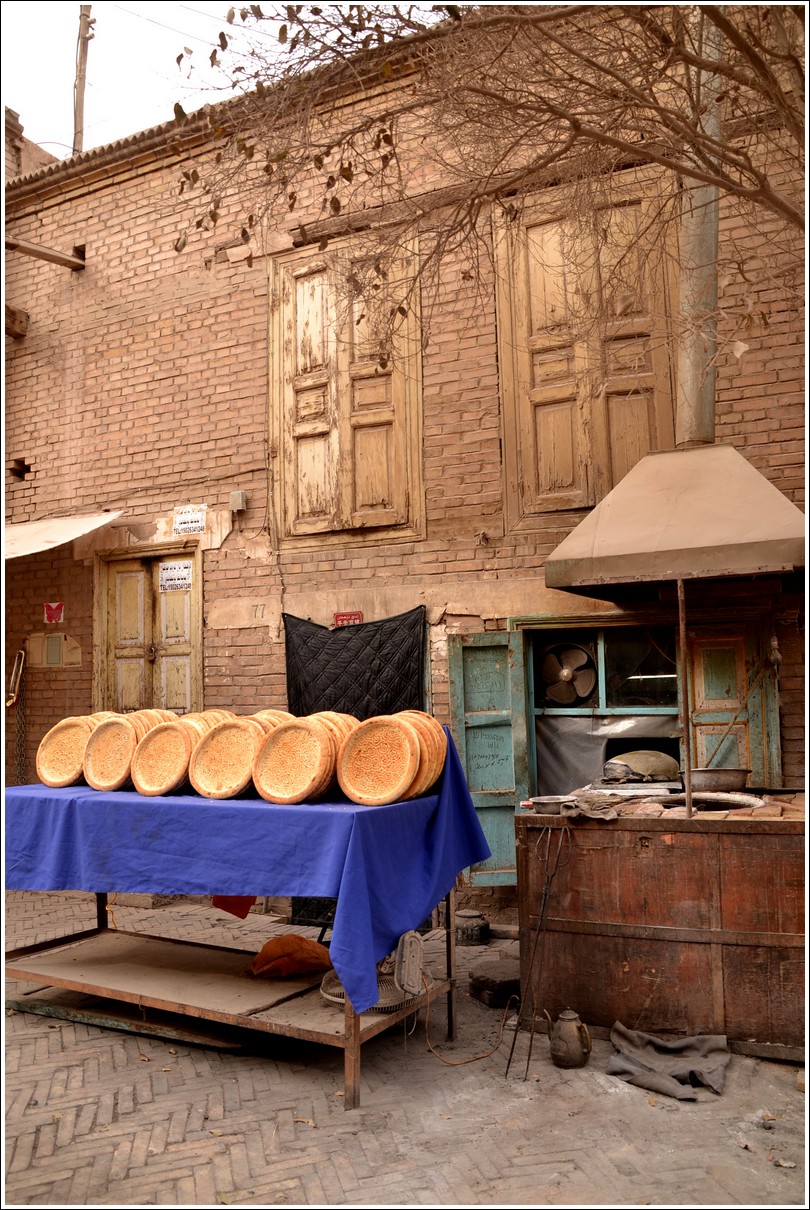 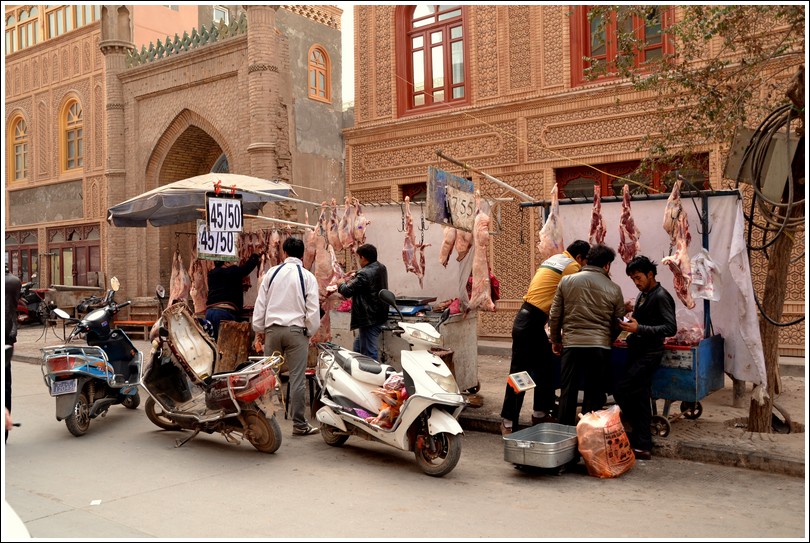 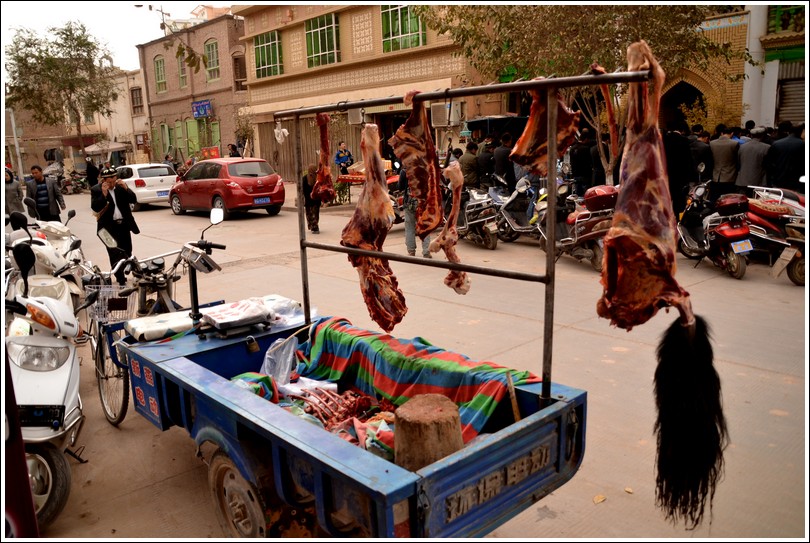 Wandering around on a Friday afternoon, men from all sides were rushing past for what we found out to be for the Friday prayer. Mats were rolled out on the ground and streets were filled with countless rows of men. Stalls and shops were shut down or simply abandoned and streets became quiet. 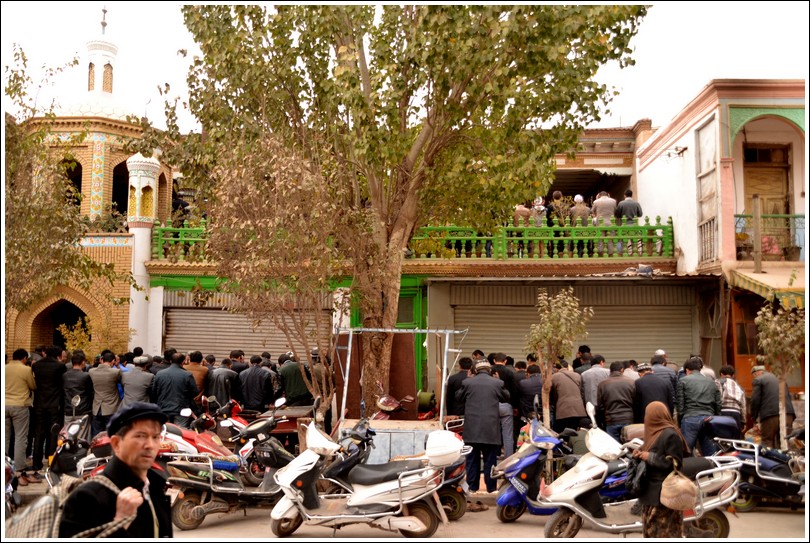 We could not imagine that this is also China but now that we have seen Kashgar and enjoyed seeing this other face of China, we more and more understand just how big and divers China truly is.