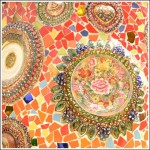 Phetchabun is one of the lesser known provinces amongst foreigners but is a popular destination with the Thai. Especially in the colder months so that the Thai can experience a ‘winter’. It’s universal that whatever you don’t have close to home becomes interesting and this also covers weather and seasons. My Thai family is always intrigued of my snowy photos of the Dutch winters and love the phenomena of breathing out ‘fog’ in the freezing cold. Phetchabun is one of the few places that brings you a tiny bit of winter to Thailand. People from all over come to camp on the cool mountain slopes to wake up to see the sunrise amidst a sea of clouds. If lucky enough, they may even breath out fog and voila, there you have it, a Thai winter wonderland.

In the other months, Phetchabun is famous for something that shines and glitters in a mountain valley. Everyone who has been to Thailand eventually gets a bit of a wat or temple overload. As beautiful as they are, after the first 50 gleaming golden temples, they all start to look alike. But not with this temple in Phetchabun, as it does shine and glitter but with more than just gold.

The pagodas at Wat Pha Sorn Kaew are decorated with over five million colorful tiles in a stunning mosaic. Buddists from all over Thailand have made the pilgrimage to Wat Pha Sorn Kaew to donate valuables ranging from pieces of jewelry to benjarong, Thai pottery painted with gold leaves. Jewelry may consists of strings of beads, quarts necklaces but also real silver, gold and even gem stones. 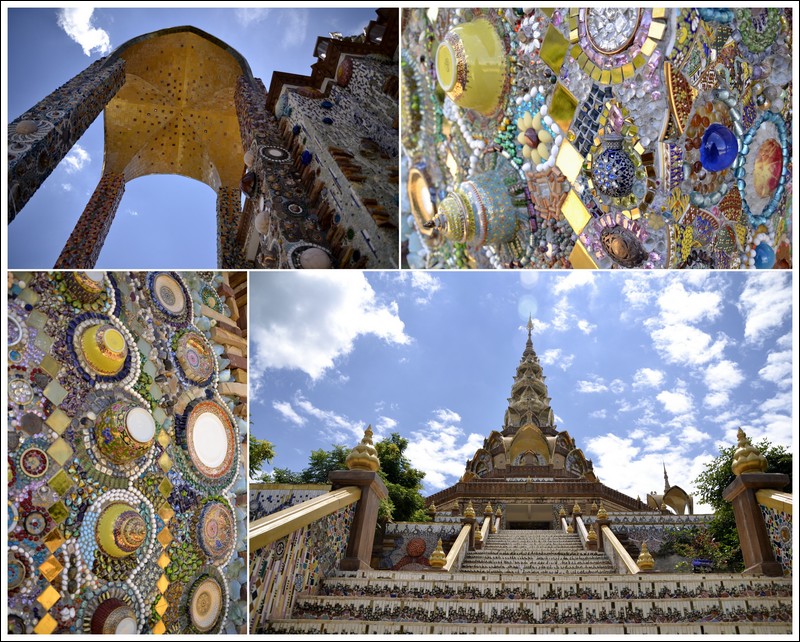 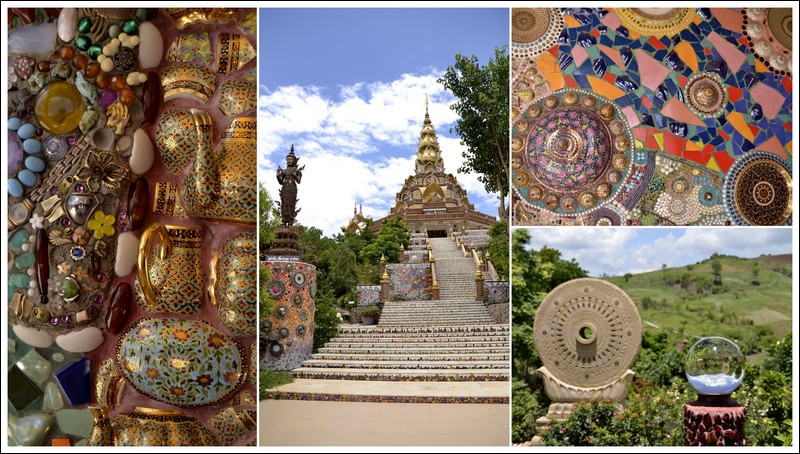 A masterpiece amidst the valley

The temple complex’s location is considered a holy site by the villagers as years ago, they claim to have seen a shining crystal ball float around the area before disappearing into a hill side cave. The crystal ball is believed to be a holy relic returning to its location. With collaboration and donations from villagers and Thais throughout the country, the temple complex was erected. The temple and its beautiful surroundings with flower filled gardens offers meditation spaces and a dharma school where people come to practice vipasana meditation and follow Buddhism courses. And who can question them with such a location, set in a mountain valley dotted with hill tribe homes. 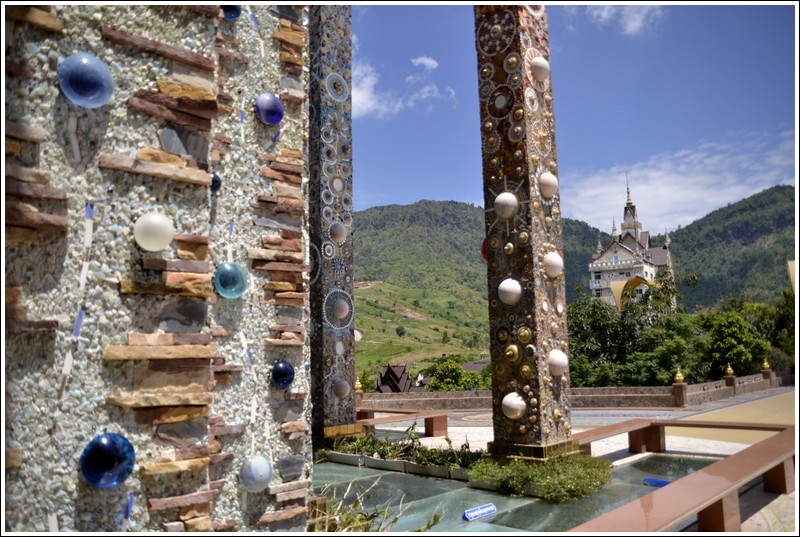 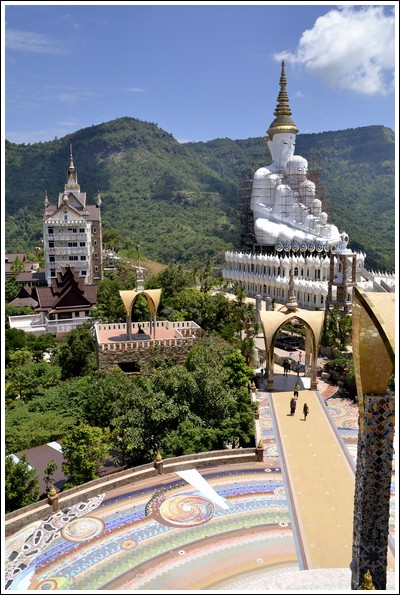 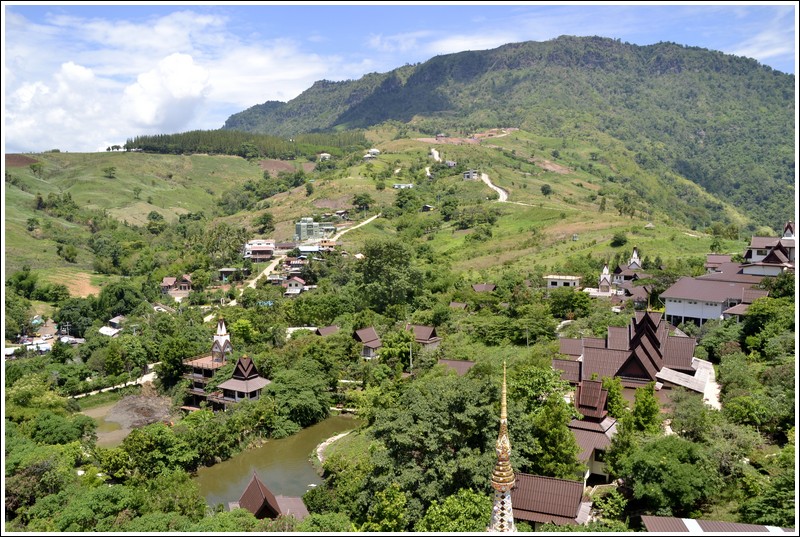 This temple chose to use gem stones and other valuables that shines and glitter with the lesson that people define everyday things as either valuable or not valuable. Why is a ruby bracelet more valuable than a beautiful red stone beaded necklace? In addition, Buddhism teaches that nirvana cannot be reached as long as people still long for earthly possessions. Small signs are set around the complex with life questions which can be discussed further with the resident nuns that wander around the temple.

Visitors are also reminded that stealing results in bad karma. Stories of people stealing and returning gemstones are widely told. Apparently some did not even make it out of the village as their car mysteriously broke down or strange accidents happened to remind people that bad karma does bite you in the butt. 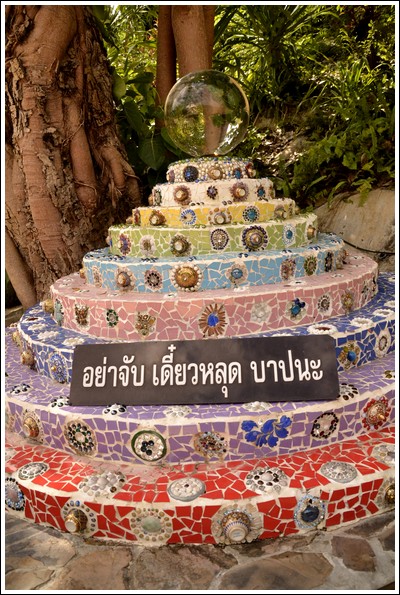 Most wats around Thailand teaches Buddhism way of life, however, this wat also gives you food for thought whatever religion you practice.

Wat Pha Sorn Kaew is located in Khao Koh district, Phetchabun province which is around 5 hours drive from Bangkok. It’s off highway 12 between Phitsanuloke and Lom Sok. This can be visited if in the area of Phitsanuloke which is a great transit stop between Bangkok and Chiang Mai. There is no public transport to the temple so you would need your own set of wheels. 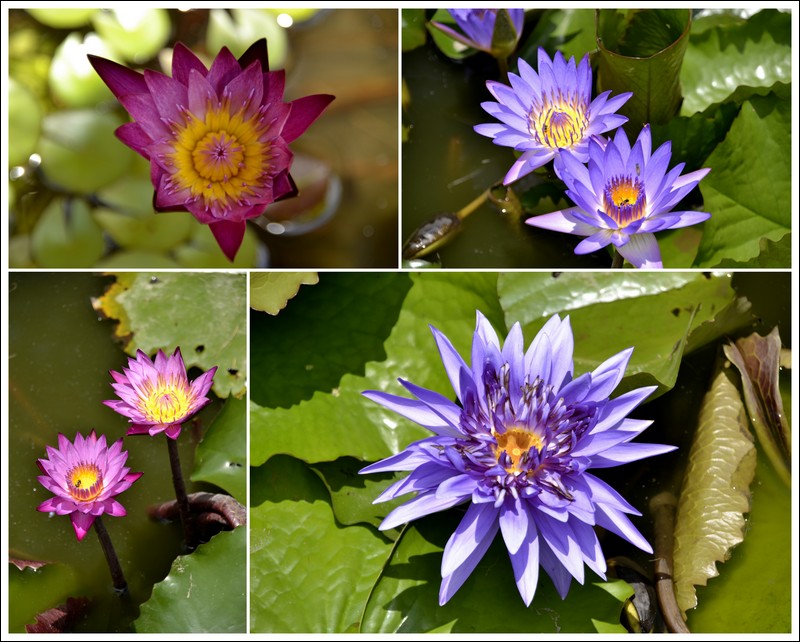